What is Cable TV?

Cable television is a system that delivers TV programming from a service provider to a home using coaxial or fiber-optic cables. Data is transmitted through a series of these cables via voice and video signals and then unscrambled so you can watch shows on your television set.

It was invented in the late 1940s as a better way to receive signals compared to the previous over-the-air method used. This technology made TV service far more accessible to rural and suburban households. To help you decide if cable TV service is right for you, we gathered information about the top cable providers in the U.S. below.

How Cable TV Providers Stack Up

*TV service availability based on service address. All pricing varies by location and is subject to change at any time. Additional fees and terms may apply. As of 8/4/21

Is Cable TV Right for Me?

Since cable TV mainly runs on pre-existing coaxial infrastructures, it’s readily available in most parts of the U.S. Depending on where you live and what providers are available near you, cable TV can cost as little as $25.00/mo for 75+ channels. Yet, it’s not a service for everyone.

Cable TV typically costs more than satellite TV, though, it makes up for it with a wide range of TV channels and exciting features. Coupled with a digital video recorder (DVR), cable TV comes with added perks like video recording, cloud storage, and TV on-the-go. It’s great for families with children, TV bingers, and sports fans that want to watch their favorite teams live. To save even more, providers offer bundle deals where you can combine cable TV service with internet and/or phone for a whole-home entertainment experience. Now, you can have it all.

You can purchase cable TV service as a standalone plan or bundled with phone or internet to save money. Once you decide on the services you want, you’ll need to select your channel lineup. A TV channel lineup is a list of set channels or networks that come with a specific TV package.

Cable providers negotiate with television networks to decide what channels they can carry and on what programming tier they will be available. Providers name their channel lineups differently, but they all generally follow a certain tier structure such as Basic, Expanded, and Premier. We break down the differences of each below.

There’s more that goes into your TV bill than the advertised price on your selected TV package. In addition to your channel lineup, you’ll also need to take into account taxes, equipment rental fees, and premium add-on packages. All of this gets added to your monthly cable TV bill.

Depending on what providers are available near you, expect to pay anywhere from $25-$120 a month for the TV channel lineup alone. This includes the cable TV service itself and the channel tier you selected for your plan.

In order to get cable TV service, you’ll need what’s called a TV box placed in each room with a television set. Providers charge about $5 for each box you rent. If you want advanced features like video recording, cloud storage, and streaming app integration, you’ll need a digital video recorder (DVR). A DVR can cost anywhere from $5-$15 a month, so for both a TV box and DVR in your home, you’re looking at an additional $5-$15 a month extra, for each.

In some cases, you may want to purchase a cheaper TV package and simply add 1-3 specific channels you watch regularly. Providers give you the option to add premium channels or whole channel lineups to your TV package for an extra $10-$40 a month, each. This isn’t a bad option if you know you only want a few added channels but can add up fast if you don’t curb additions.

Cable TV and satellite TV were invented in the mid-1900s, and the main problem they solved was accessibility. The first electronic television invented in 1927 was an over-the-air service that relied heavily on line-of-sight delivery using stationary radio stations. Unfortunately, that prevented many rural and suburban households from subscribing to TV service.

Both cable and satellite TV use technology that makes TV signals more reliable and accessible. Cable TV uses grounded cable lines that are protected from the elements, while satellite TV is a wireless service that uses dish antennas that can be easily installed anywhere in the U.S. Cable TV typically costs more than satellite TV but, again, is less likely to be affected by bad weather. Finding the right TV service depends on multiple factors like where you live and what providers are available near you.

“Basic cable” refers to a cheap TV package with a limited lineup of about 10-70 local channels available from a cable TV provider. These basic packages typically cost $20-$50 per month depending on what providers and plans are available in your area.

Nearly all TV providers offer special discounted rates to customers who bundle TV with one or more services. Rather than getting TV from one provider and internet from another, many providers bundle internet and TV to encourage customers to set up all their services under them.

This sales tactic is a key way for TV companies to maintain their customer base amid increasing competition between internet and TV companies. You can expect to save anywhere from $10-40 a month if you bundle your services.

It all comes down to the method of transportation. Cable TV providers use either a coaxial or fiber-optic cable connection and a cable box to deliver TV service via radio frequencies. Satellite TV providers use a satellite dish to deliver TV service via satellite signals. Satellite TV is available to the contiguous U.S. including Alaska and Puerto Rico due to its satellite technology. Cable, though, requires a cable network connection and has limited availability in rural areas.

4K TV, otherwise referred to as “Ultra HD TV,” describes a picture resolution of 3840 x 2160, for a total of 8.3 million pixels. That’s roughly 4x the resolution of a regular HD TV with 1920 x 1080 pixelation, which results in a much sharper image. To experience this, you will need a 4K television set and TV service that offers 4K programming.

TVs have a relatively long lifespan in comparison to other devices. However, due to frequent advancements in technology, new iterations at cheaper price points make older models seem obsolete in the streaming age. Your TV may perform at peak capacity for up to 5-7 years, but it’s likely that you’ll want to upgrade to something bigger and better as TV prices continue to drop. View the best TV deals in 2022 to see if it’s indeed time for an equipment upgrade.

While cable TV has a lot to offer in the way of entertainment, streaming internet TV is a growing alternative for those with select preferences. Services like Netflix®, Hulu®, Prime Video®, and HBO Max® have transformed the way many Americans today enjoy their favorite shows. These internet TV streaming platforms cost between $5-20 a month for service.

To keep up with these digital trends, TV providers, program networks, and big brands are beginning to offer similar streaming services. NBCUniversal recently launched Peacock to compete with the likes of HBO Max, and household names have invested billions into new platforms such as Apple TV+ and Disney+. 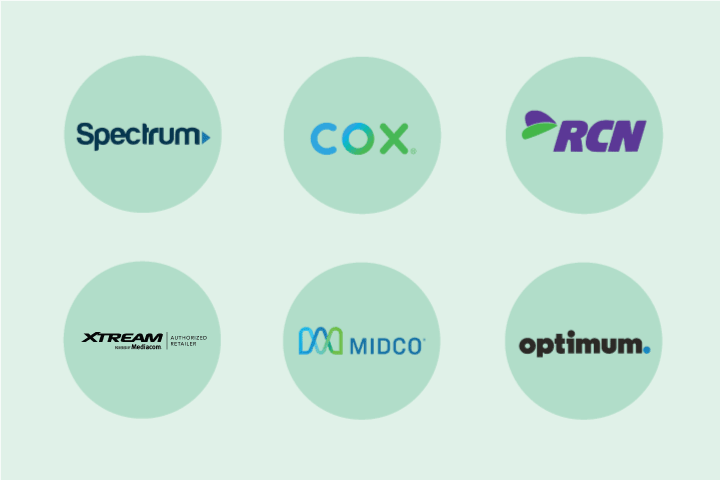 The Best Cable TV Providers of 2022